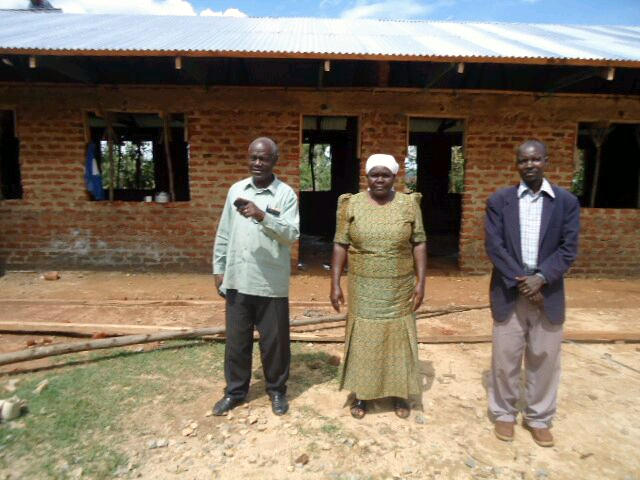 In summer 2014 the sight of a small building in a village in Kenya reduced Bobbie Frere to tears. A mud hut, used by the church’s primary school as a kindergarten, had a floor infested with insects that made the children ill. A year after that encounter, thousands of pounds have been raised and a new brick-built kindergarten is nearly ready for use. Children playing in front of the old kindergarten building

The discovery of the dreadful state of the kindergarten building was one of the most significant moments of the Frere family’s visit to Kenya in summer 2014. Bobbie knew right away that God was calling her to do something about it and learned that the local church would implement a building project if funding could be found.

She told the story to Christ Church at a fundraising lunch a few weeks later. The project was under way! Inside the old building: the mud floor harboured insects which gave the children diseases Digging the foundations of the new building The walls of the new building going up: the photo is grainy but the progress is clear Now the roof is going on Roof complete! Still to be done: plastering and fitting metal doors and windows Mama Bishop (centre) has been supervising the work Nearly ready for use! There is still some painting to be done inside… and we aim to equip the building too Chris Amulo has played a vital role in developing the link between Christ Church and Vihiga District in western Kenya. The kindergarten is in the village where he was born and grew up. Chris now works with Navigators Kenya to train Christian leaders, and is himself doing a distance course at Redcliffe College, Gloucester.

Chris is passionate about the transforming power of the gospel which motivates his own life. It gives a dignity to each person and enables them to stand up against corruption and injustice and to challenge leaders who have no concern for the poor. A familiar face: Chris is one of the people featured in the photo montage in our entrance hall

Chris is also passionate about education which offers a path to a better life through more contact with the outside world, more productive food growing methods and better health. The new kindergarten really does offer hope for the future of the village.
“In 20, 30, 40 years’ time people will be able to say ‘I am who I am because of what Christ Church did’”

What could you buy for £8,000? In Kenya, that’s enough to build and equip the new kindergarten. We’ve set about fundraising in traditional Christ Church style, getting as many people involved as possible. The Lunch Club ran an all-age Craft Fayre which raised over £400 for the kindergarten, and a similar amount for Amani Children’s Home The rain has stopped but our sponsored walkers are still cold and wet: and they have raised hundreds of pounds for the kindergarten

19 teams tested their knowledge in the quiz, then items ranging from holidays to eggs went “under the hammer” in this special event. Over £1700 was raised, to be shared between the kindergarten and Amani Children’s Home, Tanzania. Bobbie explains what motivated her to start the kindergarten project “Please be generous”: and you were Allan acted as quizmaster and auctioneer

Find out more about our links with Kenya, Tanzania and other partners on our World Connections page.